It is believed that handbell ringing began in England about three hundred years ago, although it is possible that the Chinese were using handbells as long as 5000 years ago.

Musical handbells, tuned in sets and fitted with leather straps, very similar to the ones used by the Bingley Handbell Ringers were introduced in the late 17th century and quickly became popular among tower bell ringers.

Originally, handbells were used by the tower bell ringers to practise their change ringing, which meant that they did not need to stand in a cold and draughty Church, but could practise in the comfort of their own homes, or, more likely, in the local hostelry!

As the name suggests handbells are rung by hand. To ring a handbell a ringer grasps the bell by its slightly flexible handle (traditionally made of leather) and moves the wrist to make the hinged clapper inside the bell strike. The clapper on an English handbell is on a hinge and moves back and forth in a single direction, unlike a school bell in which the clapper swings freely in any direction. It also has a spring that holds the clapper away from the casting after the strike to allow the bell to ring freely. Furthermore, the shaft of the clapper is rigid, such that the bell may be held with its mouth facing upward. Handbells can weigh as little as 7 oz (200 g) or upwards of 18 lb (8.2 kg).

A handbell choir or handbell ensemble (in the United States) or handbell team (in England) is a group that rings recognisable music with melodies and harmony, as opposed to the mathematical permutations used in change ringing. The bells used generally include all notes of the chromatic scale within the range of the bell set. While a smaller group uses only 25 bells (two octaves, G4-G6), the sets are often larger, ranging up to an eight-octave set (97 bells, C1-C9). The bells are typically arranged chromatically on foam-covered tables; these tables protect the bronze surface of the bell, as well as keep the bells from rolling when placed on their sides. Unlike an orchestra or choir in which each musician is responsible for one line of the texture, a bell ensemble acts as one instrument, with each musician responsible for particular notes, sounding his or her assigned bells whenever that note appears in the music.

To ring a handbell, the ringer moves it in such a way that the clapper strikes the inside surface of the bell, usually holding it against his or her shoulder, bell-upwards, and then swinging the bell through an elliptical shape to cause the clapper to strike the casting of the bell. The tone of the bell will continue to resonate, decaying naturally until it stops completely, or until the ringer stops the tone by damping the bell with a hand, on the body, or on a padded surface. At Bingley we currently ring "in-hand" though many teams ring by picking each bell up in turn from the table and we ring from a music score that has each note highlighted in different colours; this means that ringers do not have to be able to read music to ring the handbells. 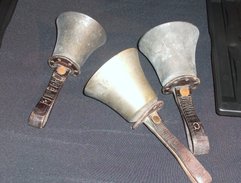 In the late 19th and early 20th centuries tune ringing on hand bells was extremely popular across the industrial towns of Yorkshire and Lancashire. Teams played with large sets of bells, often upwards of 150 bells per team. During the period 1855 to 1925 large hand bell contests were held at Belle Vue, Manchester. Following the first World War many teams died out and many sets of bells have remained in store cupboards for long periods since.

We are not 100% certain how old our bells are, but they were made by a Bradford bell founder, James Shaw & Son, in premises on Leeds Road during the period 1848 to 1902. Some of the bells are duplicated, which suggests they probably date from around 1875 to 1890, when teams began using duplicate bells to extend the range of music they were able to play. There is also some hand bell music in the tower dated 1882.

In 2009 the tower bell ringers sent the hand bells to John Taylor’s bell foundry in Loughborough, to obtain a quotation for restoring some of them to their former glory. We were quoted £3200 to restore or replace sufficient bells to form a 2 chromatic octave set (25 bells) which could then be used for both tune ringing and change ringing. 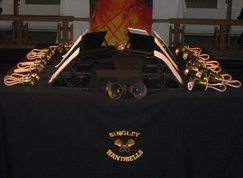 We launched a fund raising campaign to raise the money required and acheived the sum required, by March 2010, by our own efforts and with grants from the Bradford and Bingley Building Society and Shipley Community Chest.

In July 2010 the restored sparkling bells were returned to us and we held our first practice in July 2010. Our first public performance was on the 11th December 2010 at Holy Trinity Church Idle at the Christmas carol service for the Western Branch of the Yorkshire Association of Change Ringers; our second was on the 19th December 2010 at the All Saints Church Bingley carol service. Our first appearance at a Handbell Rally for the North East Region of the Handbell Ringers of Great Britain, at Grassington, was on 21st May 2011.

Subsequently we also received a grant from CNET to help us pay for a storage cupboard and other equipment.

In 2011/12 we initiated a further fund raising appeal to raise £2300 to restore another octave of handbells. By April 2012 we had been successful and on 6th July the restored bells were received from John Taylor's Foundry.

In 2015 we successfully applied for a grant from Skipton Building Society to purchase additional handchimes to use to teach ringing in schools. Our first attempt to teach a group of children did not work out well so its back to the drawing board with that initiative however we do use the handchimes in our repertoire.